As you get older, your body’s cells age too. Some of them become damaged and start releasing harmful chemicals like pro-inflammatory cytokines that speed the aging process and contribute to age-related diseases. They may even play a role in the development of Alzheimer’s disease. These dysfunctional cells are known as senescent cells or “zombie cells” because they refuse to die. They just keep on pumping out that nasty stuff.

As a Warrior, you know you’re in a fight for your health, and you can fight these zombie cells, too. Recent research from the University of Minnesota Medical School found that fisetin, a compound found in fruits and vegetables, reduces the level of zombie cells. For their study, they treated elderly mice with fisetin, which resulted in improved health, reduced age-related disease, and increased lifespan.

That’s great for mice, but what about humans? The researchers took fat cells from humans and introduced the compound to see what would happen. Just like with the mice, they saw a reduction in zombie cells. Now, they’re hoping to do a full-fledged study in humans.

In the meantime, you can fight age-related disease—and those zombie cells—by eating lots of fresh, organic fruits and vegetables. Make vegetables the “main course” at your meals and think of protein as the “side dish.” If you’re looking for inspiration for brain-healthy preparations, look at some of the free recipes on my website or in The Brain Warrior’s Way Cookbook. One of my personal favorites is Super Recall Roasted Brussels Sprouts. Here’s the recipe for you. 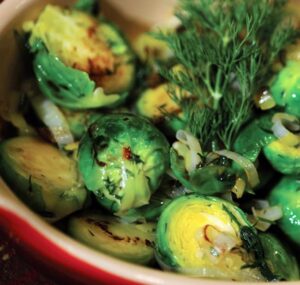 2 leeks (cut in half lengthwise and then sliced, white parts only)

Salt and pepper to taste

In a large skillet heat the coconut oil over medium heat.

Add leeks and sauté for 1 minute.

Add Brussels sprouts and cook for 5-8 minutes, or until nicely roasted outside and tender inside, stirring occasionally

Season with salt and pepper, as desired. Sprinkle with fresh dill if desired, and serve.

Rest: Is It Good for You or Just Laziness?
In today’s fast-paced, information-overload world, it’s no wonder that many of us struggle with simply...
Read More
The 4 Secrets to Being Your Best
We all know that life is complicated, so it can be helpful to break down...
Read More
Beat the Cold Weather by Heating Up Your Love Life
Baby, it’s cold outside—but your love connection doesn’t have to be! Just because we’re feeling...
Read More
How to Process Your Emotions in a Healthy, Productive Way
In addition to being the official kickoff to the new year and the time when...
Read More
Shocking Insights About the Impacts of Light Drinking
Do you like to have the occasional glass of wine with dinner or a margarita,...
Read More
5 Ridiculously Easy Meditation Tips for Beginners
For those of us coming fresh off the hustle and bustle of the holiday season...
Read More
3 Steps to Improve Your Quality of Life This Winter
The last few years haven’t been a walk in the park for any of us....
Read More
Could New Year’s Resolutions Actually Be Harming Your Health?
We all know the old song and dance: We’ve closed out yet another calendar year...
Read More
Strength Training for Seniors: It's Not Too Late to Start!
Many of you already know that strength training is one of my favorite forms of...
Read More